For the past few months now, Parvathi’s life has been a flurry of arbitrary violence. (Al Jazeera)The nationwide lockdown across India has forced the country to shut their doors to the world; the safety of the hearth now, is the world’s biggest weapon against the deadly virus that seems intent to leave a permanent mark on humanity. For the 45-year old cook from Chennai, however, safety was never an option. While the nation scurried into their homes, like mice caught in a thunderstorm, Parvathi’s refuge transmuted instead into a vortex of unprecedented terror and domestic violence.

Like many other women from her community, domestic terror has been an innate part of Parvathi’s life since the earliest days of her marriage. In developing countries like ours, where the rate of illiteracy and unemployment are generally high, and where the subjugation of women is a commonplace practice, the statistics for violence within the home is generally higher than that in developed nations.

Under normal circumstances, around 2 out of every 5 women in India, between the ages of 15 to 49, have experienced spousal violence. The Protection of Women from Domestic Violence Act (2005) defines domestic violence as a violence that is “comprehensive and includes all forms of physical, emotional, verbal, sexual, and economic violence, and covers both actual acts of such violence and threats of violence.” In short, any threat to the health and safety of a woman, whether physical, mental, psychological, or economical, falls under the category of domestic violence. However, while the manifestation and expressions of the various shades of abuse might be different, its source of origin in this case is one and the same-the home.

A careful scrutiny of past global events would reveal that women are rendered especially vulnerable to abuse during emergency situations. and the COVID-19 pandemic is no exception. The isolatory nature of the virus-driven emergency has seen a worldwide implementation of home quarantine methods. For women across India, however, the home, rather than offering the promised refuge, has transformed into a torture chamber with little scope of escape.

A SPIKE IN CASES

According to the National Commission for Women(NCW), a sum total of 587 cases of domestic abuse has been recorded between March 23rd to April 16th. Most rural women who fall prey to spousal violence are generally receptors of their husband’s expression of economic or social frustrations. The lockdown to tackle the global pandemic has led to a general rise in unemployment, and the terrifying cocktail of a tight financial situation, lack of resources and reduced mobility, has turned the home space into a battlefield.

Consider the aforementioned case of Parvathi, the 45-year-old cook from Chennai. Working odd jobs in homes across the city, Parvathi was the only breadwinner of her house. A frequent victim of violence during the early years of marriage, Parvathi had managed to alleviate the brutality of her situation by garnering a steady income that would take care of the household, as well as buy her unemployed husband’s daily drink. Now bereft of income, however, the savagery within her home has climbed upward again.

In another case submitted to the NCW, a father alleged that his son in law brutally abused his daughter. Apart from the regular beatings carried out in a drunken stupor, he said, his daughter had been forced to go without food ever since the lockdown started.(The Guardian) Elsewhere in Bengal, a woman was forced to starve in Bengal during lockdown, when her husband stole her ration card. (News 18)

HOW ACCURATE ARE THE PRESENT STATISTICS?

The statistics provided by the NCW, however, can hardly be accurate. The nationwide lockdown has confined the operation of women’s helplines and NGO’s to phone calls and emails only. The restrictive methods of reporting would naturally mean that any person without access to a working internet connection or a mobile phone will not be able to report violence. Owing to widespread poverty, illiteracy or general domestic supervision and patriarchal restrictions, around 57% of women in India do not have access to a mobile phone, and only 30% of Indian women are Internet users. Understanding then, that a large proportion of India’s domestic violence victims are either illiterate, too poor or not equipped to own a phone, it is not too difficult to recognize the inaccuracy of the quoted figure.

Another significant contributing factor to the lack of reporting is the patriarchal family structure. Internalized misogyny, lack of education and cultural indoctrination have often led women to accept spousal violence as a justified tool for ‘domestication’ and punishment. According to a report presented by the National Family Health Survey, around 52% of women across India support wife-beating. Social stigma and cultural taboos have often left incidents of domestic terror unreported, held furtively within the four walls of the home like a coin within a closed fist. 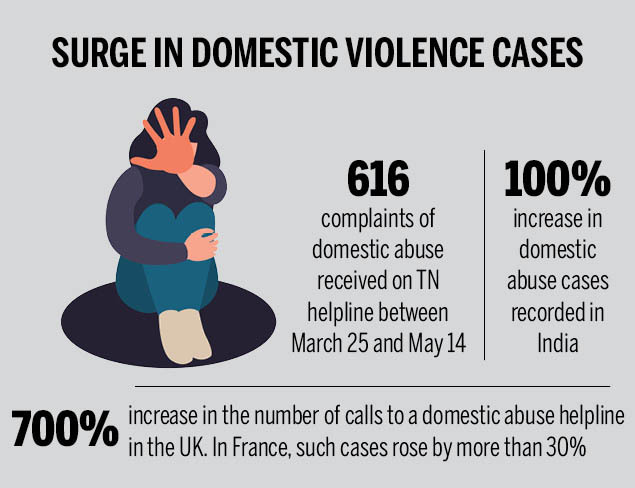 The Times of India: A cited record of the flux in the reported cases of abuse over lockdown

ABUSE AND ITS EFFECTS

Apart from the obvious, viscerally physical damage of abuse, the mental scars generated in the wake of domestic violence are equally jarring. Most prevalent psychological effects of intimate partner violence include post-traumatic stress, acute depression or anxiety. Confined within the household, the victims are kept from reaching out to their families or the community for support, which may have otherwise been done to alleviate the situation.

Spending weeks at a stretch with one’s abuser would also render women vulnerable to increased sexual violence as well. The leniency of the Indian Law, which is yet to recognize the criminal nature of marital rape, only exacerbates the situation. With public hospitals closing their Emergency Units, the scope for obstetric help or any other form of medical aid is near-impossible for the homebound victims.

The COVID pandemic, however, will have gender-based repercussions far beyond just domestic violence. In a post-COVID world, employment rates are bound to nosedive for both sexes, but the feminine half will have to bear the bigger brunt.(The Week)If we survey global economic trends in post-recession periods, we would find that the rate of unemployment among women generally tends to rise much more than it does among men. In both corporate as well as private sectors, a woman’s labour, whether intellectual, physical or otherwise, is generally deemed expendable when compared to that of a man. The economic fallout will then, for low-income households where women are the only breadwinners, lead to reignition of the cycle of violence and depravation.

Despite the rising rates of violence, the Government of India is yet to take any concrete measures towards curbing the growth of domestic abuse. The implementation of telephone helplines or online measures are only meagre steps in the battle against the monstrosity of the escalating situation. Perhaps, nothing short of door-to-door surveys and legal protection, implemented unconditionally, would be enough to flatten the growing curve of terrorism-behind-doors.

The shadow pandemic raging behind closed shutters is bound to leave scars almost visceral as that of the one outside. The dented state of mind of those falling prey to the domestic terrorism is perhaps irredeemable. As the global crisis heightens its intensity, it’s ravages, both visible and invisible, continue to rise steadily. Like a secret slipped quietly under a doormat, spousal violence remains an ever-growing, ever-silenced problem in the Indian life, a dynamite fueled by the compulsion to stay at home, waiting to explode and tear apart the very fabric of society.

A comprehensive guide to the domestic violence helplines currently operating in India can be found here: http://www.ncw.nic.in/helplines.